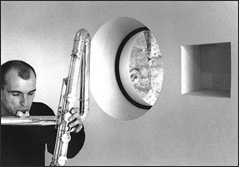 
Composed and arranged by Andreas Stahel

The flutist, vocal performer and composer Andreas Stahel has developed an extraordinary and unique tonal language particularly on the low transverse flutes which he presented for the first time in 2004 on his solo album Helix Felix (TON 017).

On his second CD Circular Hocket he consistently follows the chosen direction: It contains ten new compositions from the borderland of minimal music, ambient, contemplation and contemporary music.

By means of circulation breathing he weaves continuous and planar sound fabrics that can emanate contemplative quiet but still reach breathtaking speeds. These sounds which are exclusively created acoustically bring to mind electronic music at times.

The repetitive and strongly reduced sound material (in fact only the sounds from the Doric scale above H are being used) creates sound pictures as well as the uneven metrics dynamics and complexity. The tension between these poles leads into a maelstrom which the listener has a hard time withdrawing from.