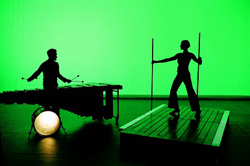 How to write about Ania Losinger and Matthias Eser‘s music? Not an easy venture. Long and intricate sentences would inevitably override the object, failing exactly where the artists excel: in the instant of reduction, of weightlessness, in casting off the burden. The burden of ones own experience, the burden of historical expectation – what Edoardo Sanguineti nonchalantly called the «dirt on our shoulders». Losinger‘s and Eser‘s freeing gesture is no casual or irresponsible one; elements are consciously debated before being discarded. In this way, what remains – rather than being a naked scaffold – is an essentially condensed kernel, anchored in history yet freed of its excesses.

To describe their music as ‹rhythm turned into sound› is a shortcut. It puts into words the idea of unity and fusion in­herent to the condensed reduction of the project. The artists emphatically practice what Adorno critically called the «Verfransung der Kuenste» in 1966 when referring to the works of Kandinsky, Varèse, Cage or Ligeti. The distinction between time and space in art, already postulated 200 years earlier in Lessings Laokoon, is no longer valid. Losinger and Eser‘s repetitive polyrhythms seem to detach themselves from the time axis and unfold in space; the mechanic movement recedes, giving way to an impression of freely breathing sound, subtly structured and surprising in its constantly changing aspects.

Yet the artists‘ interests go beyond this moment of unity, this transformation of time into space, to embrace the possibility of a direct connection between art and human existence. The five phases of transformation – earth, metal, water, wood and fire – inspired by Chinese healing and philosophy, serve as a useful basis for this connection. Each of the five musical sections describes one of the five elements. The rhythmic and metric structures make explicit use of the numbers attributed to each element in Chinese numerology.

In turn, color, harmony, energy and dynamic creation reflect the meaning spectrum of each transformation phase. Losinger and Eser draw a dramatic arch beginning with earth and ending with wood, after passing through water, fire and metal. In Chinese medicine, this same cycle is used to balance the vital energy. The final phase wood also implies ‹morning›, ‹departure›, ‹spring›, ‹beginning›. It is the personal and unpretentious character of the CD‘s concept, which reaches out beyond the music to touch the listener: willingly, we take a hand which promises departure and beginning, confidence and hope.