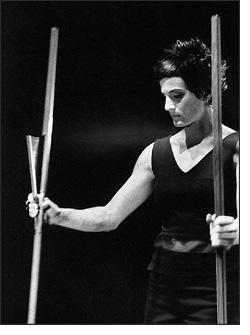 XALA is the first and only floor-xylophone in the world. The idea of the dancing musician Ania Losinger was an acoustic instrument with vibrating wood tones, which could carry the weight of a human body and chime simultaneously. She plays repetitive, rhythmically complex tone sculptures with flamenco shoes and wooden poles the size of herself. The CD, recorded without overdubs, does not lead one to believe that only a single person is at work here. It contains a video clip (compatible with MAC and PC) showing the artist performing.