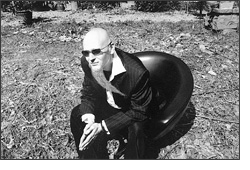 
Commissioned by the video artist Franticèk Klossner, I wrote this composition in the summer of 2004.

He wanted to expand his documentation “Ortung/Localisation”, which traces the genesis of the new parliament square in Bern, with my music.
Due to scheduling reasons, we had to work on images and music simultaneously and thus it was necessary to find a flexible model for coordinating both. To this end, we agreed upon uniform, unobtrusively rhythmical image-sequences spanning 5, 10, 15 or 30 seconds which I then used as the structural basis for my composition.

So as to be able to respond to the various moods contained within the film (the editing process still lay ahead), I wrote 80 combinable sequences each measuring 45 seconds in length. These sequences in 15/8 time, at a tempo marking of 60 to the crotchet, moved synchronously with the images. Thus I had the freedom that enabled me to be able to arrange the music in accordance to the stipulated mood of the film at any one time.

The demonstratively structured system of this composition did not only have practical or technical grounds for being. Combined with the dark, ever-changing instrumentalisation and the driving force of harmonical movement, I wanted to allude to such elements as growth and change. However, I simultaneously wanted to achieve a distance to the images that showed man’s efforts and achievements.

Last but not least - in view of the history of an old square in front of the Parliament buildings of a wealthy country – I wanted to give a critical observation of the events in musical form.
The arrangement of this CD consists of 5 parts, which, because of their orchestration, differ from each other. They contain a continuous densification and integrate sounds of the construction works, which I took over from the videomaterial.