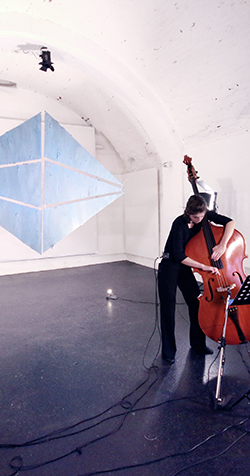 In PRAIRIE URBAINE the use of the contrabass is reduced to its natural overtones. The four harmonic series – one per string, sounding plucked – represent the only sound material, the overlapping of which characterizes the special harmony of the composition. Sinus sounds take over the pitches of the plucked contrabass and thus extend them. They become an artificial extension of the instrument, which seemingly is being played permanently. As a contrast, a recording from the city of Cairo can be heard every now and then, opposing the contrabass with the noise of dense traffic. PRAIRIE URBAINE consists of four equally long parts, the harmony of each is specifically based on one of the four contrabass strings. The composition score is computer-generated and follows a strict system of rules.  A probability table determines frequency, volume and exact position of occurrence for each individual element. PRAIRIE URBAINE creates a lengthy sound world, continuing to show the same from ever new perspectives. The development of this music was made possible by the Momento Foundation as well as the Graf Fonds of the Zurich University of the Arts. This work was premiered in January 2013 at the Zurich University of the Arts.