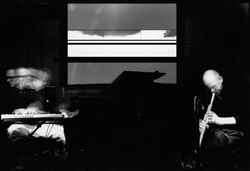 A sound out of nowhere. Hovering and continuous notes flutter around and yet, are strung together before decaying and burning up. A ray of light. A gentle gust of wind. Blue glaciers clash together. A bird soars into the sky and circles. The pure sound of this deep-felt music grips into the listener’s brain and evokes images at every moment…

The project “That Land” was initiated in 2005, when composer/clarinetist Don Li was invited by the Swiss modular furniture company USM to perform a musical event at their showroom in downtown Manhattan. Li brought along the filmmaker Pierre-Yves Borgeaud from Switzerland as well as New York-based Swiss producer and keyboarder Peter Scherer (Ambitious Lovers, Arto Lindsay, Caetono Veloso, Bill Frisell, Laurie Anderson, a.m.o.). Based on a musical sketch by Li, the two musicians improvised while landscape- and glacier videos were projected.

This music became the groundwork for a later studio recording, which took place at the Tonus-Music-Labor in Berne, Switzerland. Following the recording, both musicians treated and worked the tracks independently from each other in their home studios. Don Li composed a completely new clarinet part consisting predominantly of double notes in the overtone range (multi phonics), which blends in with Scherer’s electronic sounds. Scherer replied with further refining and condensing of his parts resulting in the final mix.

The transatlantic collaboration spanned over three years and led eventually to a grotesque, yet beautiful sonic landscape which is characterized by a consistent reduction of the material and the avoidance of any meter, melody or changes. Minimal movements in the parameters result in a sonic maelstrom, placing a spell over the listener.

In infinite timelessness, sounds and notes progressively shift and slide towards an unknown place. Its unlikely the listener will feel at home, but there is no doubt he finds himself safe and sound.